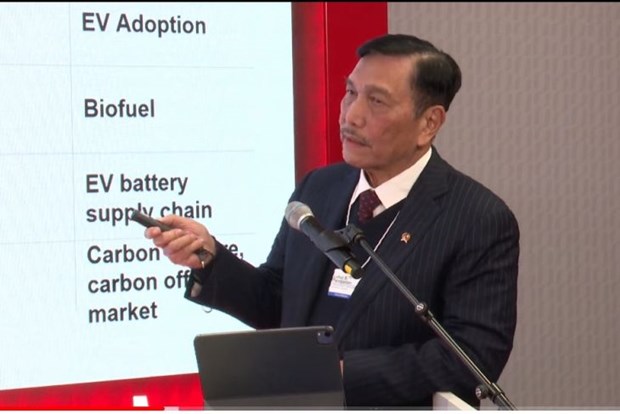 Jakarta (VNA) – Indonesian Coordinating
Minister for Maritime Affairs and Investment Luhut Binsar Pandjaitan has informed that the country will not import fossil fuels from 2045 as it will develop the potential of palm oil as an alternative fuel by then.

Speaking at a sideline event of the World Economic Forum (WEEF)
Annual Meeting 2023 in Davos, Switzerland, he said Indonesia is
currently researching the potential of palm oil and the country is aiming to
produce around 100 million tonnes of palm oil by 2045.

The minister revealed that at least 30% of
palm oil production will be used for the food industry, while the remaining 70% will be used to manufacture ethanol, hence, the country will not need to import fossil fuel from 2045.

He said that the development of alternative fuels is one of the five green
economy pillars whose implementation is being intensified by Indonesia.

The other four pillars are the decarbonisation of the electricity sector, the
utilisation of low-carbon transportation, the development of green industry,
and the strengthening of carbon sink.

According to Luhut, the transition from fossil energy to renewable energy would
encourage the realisation of net-zero emissions by 2060, therefore, the utilisation
of the derivative products of palm oil will have big impacts in the upcoming
years.

In addition, the moratorium policy aims to reduce deforestation due to the
expansion of oil palm plantations.